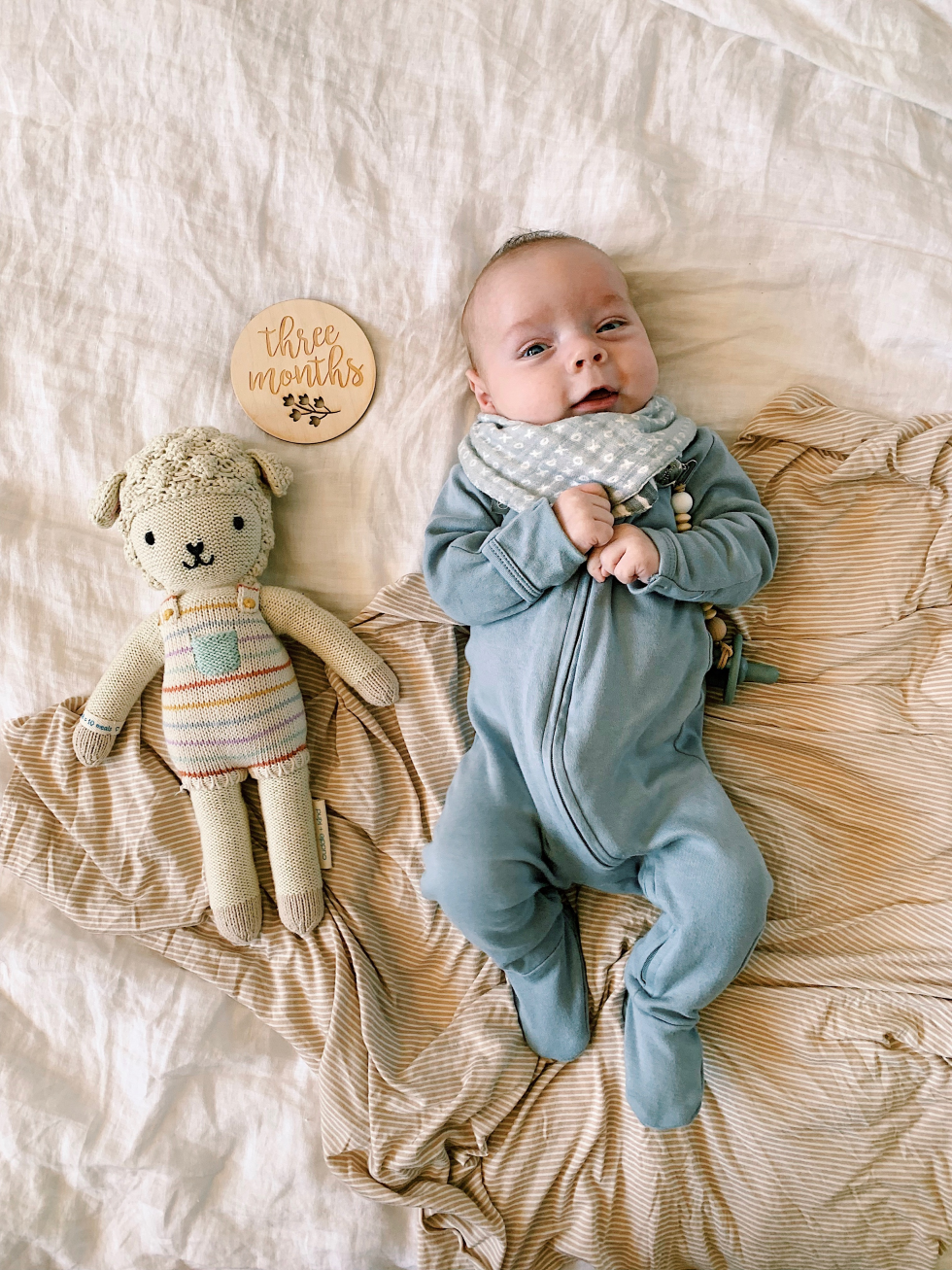 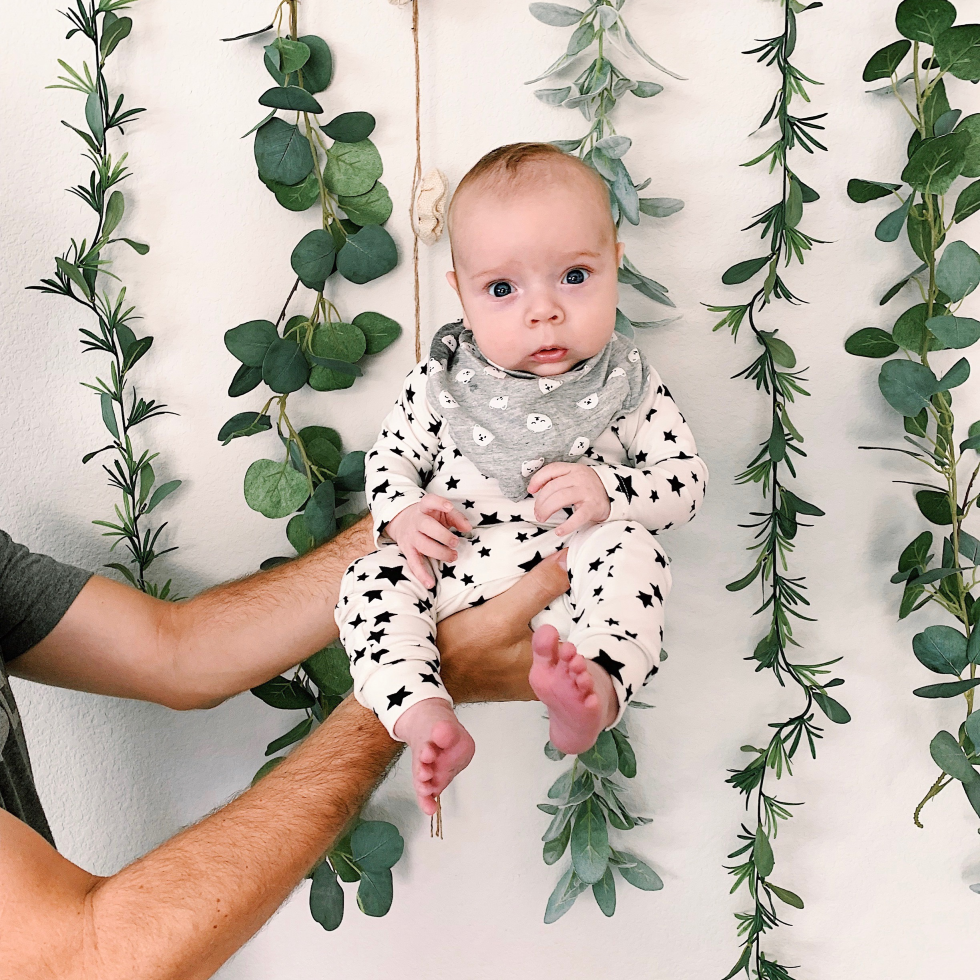 He is all smiles, coos and giggles! And CHEEKS! He loves to be held and rocked. He can already roll over from his back to his tummy! So we have been swaddling him with one arm out- we did that for a couple weeks- and just 2 days ago (so after he turned 3 months, since he was technically 3 months on the 7th), we swaddled with both arms out, using THIS SWADDLE (a favorite!) and he slept the best he ever has! Only woke up once each night! I think he was just ready for that freedom! Plus, he recently found his hand and his thumb (looks like once again, for the third time, we may have a little thumb sucker!) so he can learn to self-soothe! This is HUGE in good sleep, so I’m optimistic here! ;) In a few more days, we’re going to be transitioning to a sleep sack! Wish us luck!

Sleep has been pretty good! On average, he goes to bed around 8:30 and sleeps for 6 hours, then wakes to eat and goes back down another 2-3 hours, wakes to eat, then sleeps for another 2-3 hours and is up around 7 each day! His wake time is still 1 hour, then he’s ready for a nap. Nap lengths vary, but are usually about an hour (but the past few days have been closer to 2 hours!). I think we’re getting close to lengthening our naps and thus dropping one or two! STOP GROWING. But don’t. Because it’s really fun, too. :) Still doing a dream feed every night around 11pm.

He’s starting to grab for things and loves playing on his activity gym. He also loves baths, and gets so calm and peaceful! It’s the sweetest! His big sister loves to help wash him, too. The cutest. Oliver loves to stand up like a big boy (with help, of course) and loves having his head stroked. He gets the biggest smile!

He’s been drooling more and more! We realized we definitely need to get him some more teethers, ha! Third baby problems, we don’t have many for him… He has really been loving this one, though! His siblings both had this one which is great for teething (gets to those back teeth, too, when the time comes!) so I’m planning on ordering it for him, too! 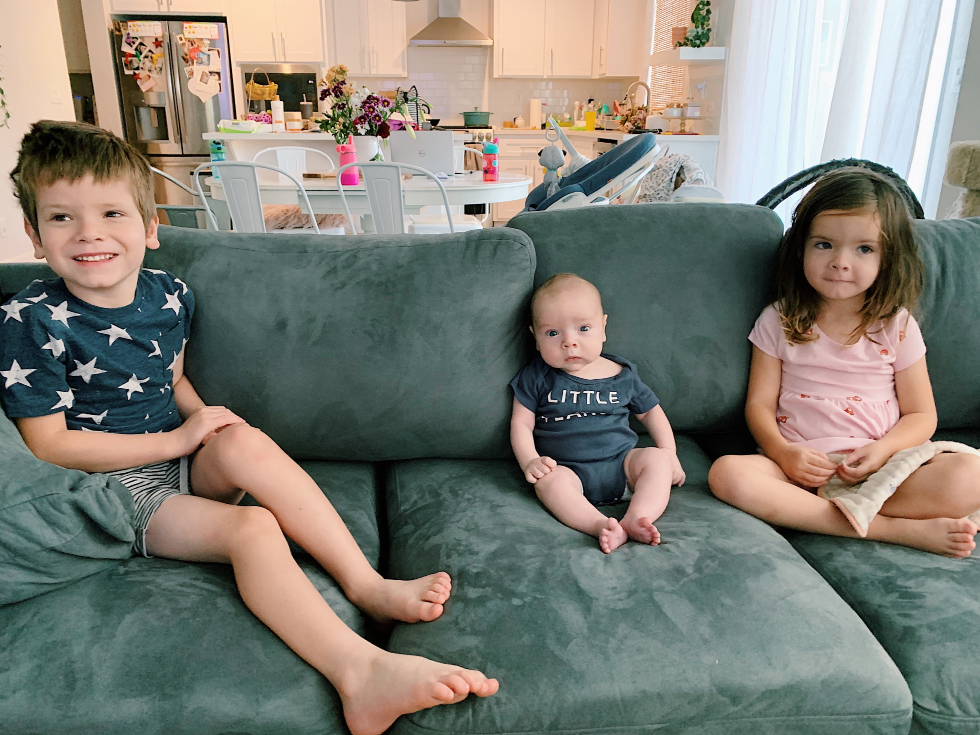 His little personality is emerging, and we’re officially out of that sleepy newborn stage. He’s so aware of the world around him. :)

Oliver Lucca, you sweet yummy baby boy! We love you so!

Itzy Ritzy pacifiers
Tiny Love Activity Gym
Mamaroo
Ergo Carrier
High Chair/Bouncer system (he sits with us at the table in this! LOVE it, yes it’s pricey, but it’s lasted for all 3 kids!)
Infant car seat
Stroller Toy (so fun!)
Teether/crinkle toy
Bouncer (still loves this!)
Other bouncer (pricier, but I love that this one folds up and is easy to take on the go and around the house!)