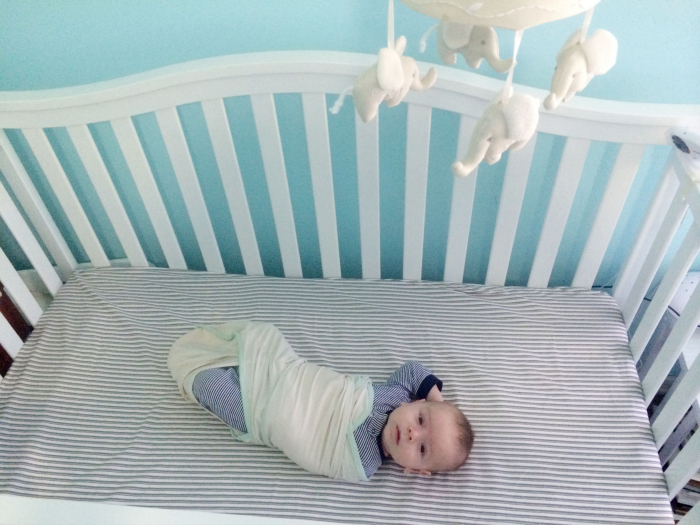 Thursday night we decided it was time to try transitioning baby to crib. And oh man. I have to be honest here. If it was up to me? He would still be sleeping in his bassinet next to our bed for… um… err… indefinitely? ;) NO, but really. The only only only reason we moved him to his crib is because we were literally forced to do so. And that sounds maybe more dramatic than it is, but I’m feeling dramatic. Really, he just grew out of his bassinet, the poor thing. We kept putting him in there, and each night it seemed his little feet were inching closer and closer to the edge and eventually he would just be this scrunched up little baby in a bassinet that is entirely too short for him. But we’re good parents, so of course we didn’t let that happen. We got him out of there juuuust in the nick of time. Literally, the feet were touching, that’s how close he was. So anyway. We were forced to move him into a more size-appropriate bed, which just so happens to be his crib. In his room. Which is approximately 10 feet from our bedroom. But that’s a lot of feet when he has been sleeping within arms reach for his entire life. Which again sounds more dramatic than it is, since he is only 4 (almost 5) months old. Again, I’m feeling dramatic. Let it be. 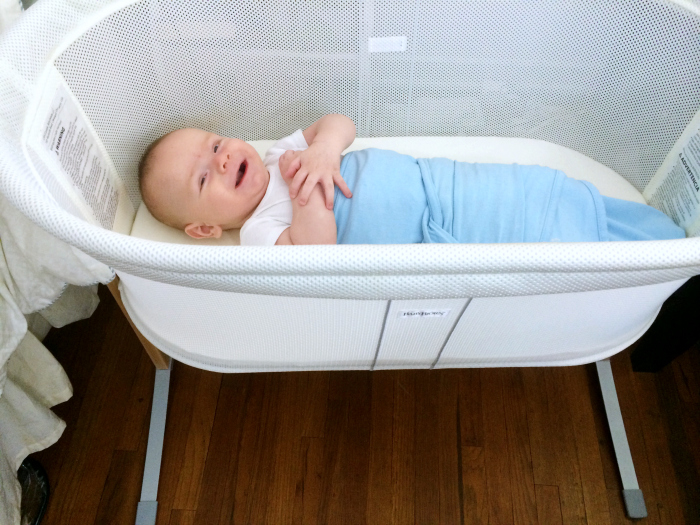 So the crib transition was an emotionally tough one for both me and Zack. Our sweet baby is growing up! And moving into his crib! WHAT?! But you know what? It’s great. I can’t believe I just said that, because I loooooooved having him in his bassinet next to our bed. Like, loved it. All of those late night feedings and the sheer comfort of knowing he’s safe, just right there next to me. It was great. And I was convinced we would leave him in there until he was like 9 months old. But again, the whole size factor. Baby needs some room to stretch. As do we all, right? But now that we ripped that band-aid off and put him in his crib, I think we’re all seeing just how great this is. He’s sleeping (pretty) great. He’s got room to move around (the first night he started with his head facing in one direction and woke up having done an entire 180 with his head facing the opposite end and it was pretty adorable just picturing him scooting around in a circle in his crib), he’s in his own little nursery that I so meticulously decorated just for him and we no longer have to tip toe around in our room when we are getting ready for bed ourselves. Plus, we have a baby monitor, which I don’t care how small your house is, is a MUST HAVE for babies. 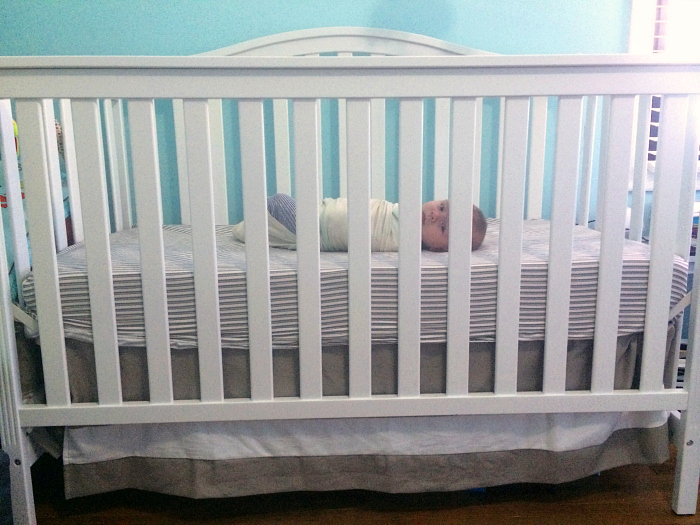 So how did it go? Well, the first night wasn’t very good. He kept waking up crying every half hour or so and didn’t finally go down for “bed” until 11:45. Yes you read that right. I know. The next night was a bit better, as we had begun having him nap in his crib all day, too, therefore he was a bit more ready for it I think, and he woke up a few times crying again but went down for bed at 10:30 this time and stayed asleep for a good 6 hours, woke up to eat, and went right back down for another 3 hours. That’s success in my book! The following night was even better, with him going down at 9:30 and waking only once to eat and then back to bed.

Anyway, boring sleep time talk aside (unless you are a new parent, in which case, this is so not boring and instead so fascinating- at least to me?) BABY DID WHAT IS SLEEPING IN HIS CRIB! We have successfully done the bassinet to crib transfer. And mama only felt like crying a couple of times, but quickly got over it when she realized how much better sleep is for everyone involved. It was time. He knew it and we knew it, and so it is working out perfectly. That’s my number one advice for any parent, please take every single piece of advice or recommendations that you hear from others or read on websites/forums/books with a grain of salt and in the end just listen to your own baby and family’s needs and DO THAT. Because that is when things will fall into place and everything will go smoothly. I mean, mostly. We’re still talking about babies here, so anything could happen. One can never get too comfortable. And who wants that? That would be boring. ;)

When did you move your baby to the crib?